Best Christmas decorations at the most luxurious hotels of the world

Best Christmas decorations at the most luxurious hotels of the world

From giant NutCrackers to pop-up Christmas Markets and from designer-made Christmas trees to festive light installations. world’s best hotels dazzle us with their spectacular decorations for the holiday season. Gustave, the emblematic red teddy bear of the Plaza Athénée has invaded the elegant lobby and a gigantic Christmas Tree decorated with red and gold ornaments. Old world elegance in the Belmond Reid’s Palace in Madeira

The best atmosphere at The Fife Arms, A former Victorian coaching inn in Scotland The glamorous Christmas tree of Aman Venice, in a spellbinding palazzo setting. A glamorous, shiny Christmas tree stands under the chandelier of the main lobby at The Post Oak Hotel at Houston The mid-century Christmas Tree! Drawing inspiration from the hotel’s building, commissioned by JFK, the festive décor transports us to a 1960s Christmas at the Kennedy White House! The Christmas Tree at The Dolder Grand, the iconic hotel of Zurich which also features more than 120 prestigious works of art. A celebrated historic hotel, listed on the National Register of Historic Places, The Willard is regarded as a world-class destination known for its rich history, luxurious accommodations, iconic bar, and central location in the heart of Washington, DC. This is its magnificent Christmas Tree! At the elegant lobby of the Roman Hotel de la Ville, created by Sebastian Flowers Italy. 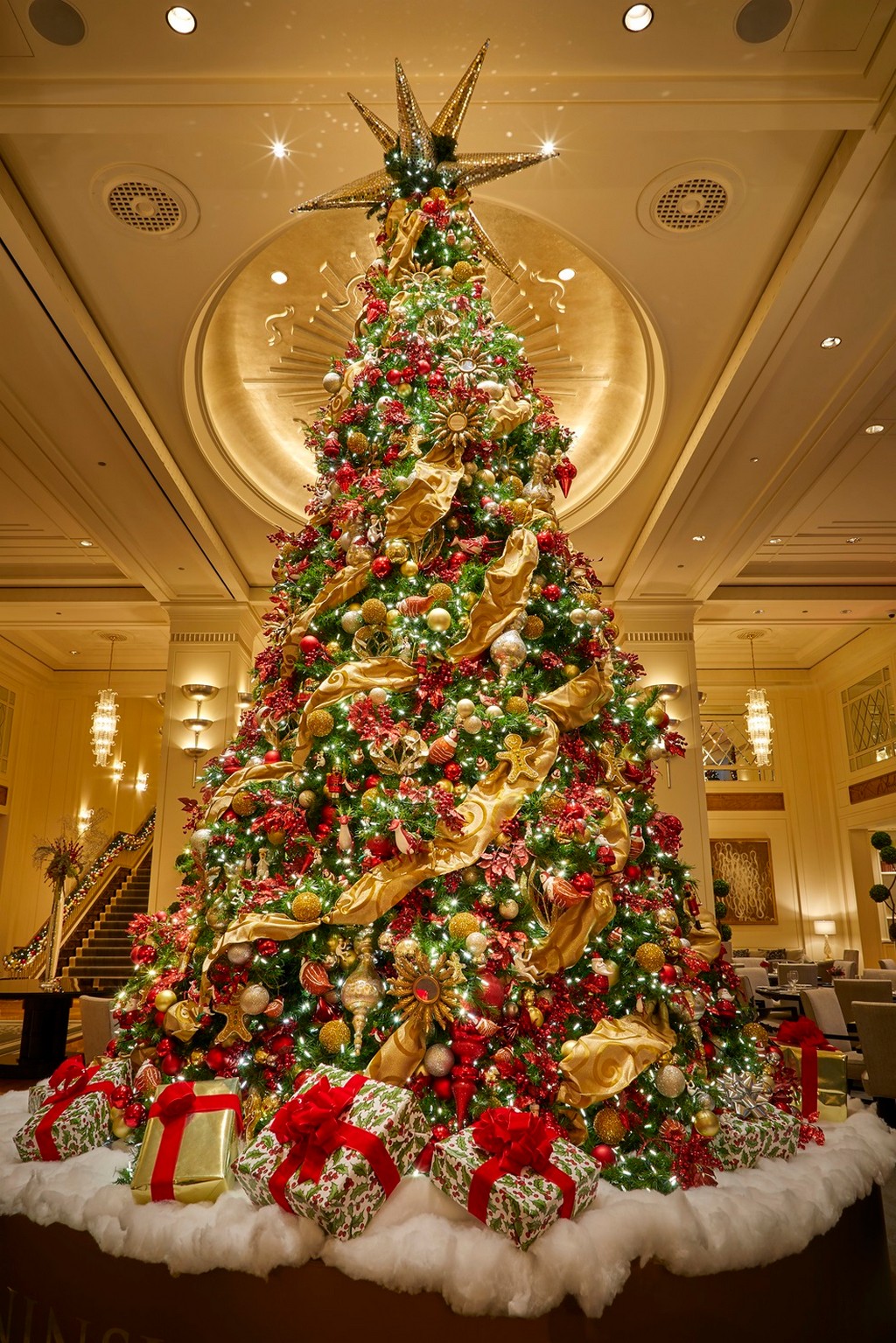 The Peninsula Chicago has illuminated a giant, splendidly decorated Christmas tree in its grand lobby. This dazzling display will be the focal point for “Stories from the Tree”, a Peninsula tradition since 2018. Six colourful characters, including the Nutcracker, Gingerbread Man, Robin, and Reindeer adorn the Christmas trees as well as the festive decorations of the hotel. The lobby of the hotel enchants with five Fraiser fir trees, 1,000 feet of garland, 100 wreaths, and a magnificent four-story outdoor light display. One of the most magical Christmas Trees is spotted at Four Seasons Hotel Lion Palace, a historic Hotel that sits within the walls of a 19th-century royal palace in the Admiralteysky district, where the opulent stylings of imperial Russia are alive and well. Every year this five-star resort creates an impressive festive atmosphere!

A 47ft tree – which stands as tall as three double-decker buses and features over 6000 fairy lights outside Gleneagles Hotel in Scotland! Multicoloured and luxurious, this Christmas Tree is so instagrammable! Ritz Paris  (All about the festive season at Ritz Paris here) Claridge’s Christmas Tree is a symbol of the holiday season in London. This year the landmark hotel of Mayfair draws inspiration from its rich and glamorous Art Deco design heritage and the Roaring 20’s.  See more here There’s a wonderful air of magic at the ‘Pink Palace’ during the festive season! The hotel’s tree is by legendary fashion house Dior. The design is dedicated to Italian folk art – Luminaria and the Dior Cruise 2021 collection. The tree is decorated with 300 ornaments in bright colours to reflect the collection by Maria Grazia Chiuri, dedicated to her home region – Lecce. This is how the Christmas spirit is making its way back at the Hôtel de Paris Monte-Carlo! Just a few steps away from the famous Jemaa El Fna square beats the heart of the Marrakesh Palace! Shangri-La Hotel London, At The Shard

Stunning! The 2020 Christmas Tree of Shangri-La Hotel in London has been created by the London-based luxury design duo from Makerversity at Somerset House, Stables & Lucraft. Strawberry fields forever. This is the inspiration behind the decoration of Hotel de Russie, created by Sebastian Flowers. The Balmoral in Edinburgh has partnered with contemporary designer Strathberry this festive season to celebrate the best of home-grown Scottish luxury. Strathberry opens its first Scottish flagship store on Multrees Walk this December and in collaboration with The Balmoral, has adorned the sparkling trees in the hotel’s famous Palm Court with decorations of the signature gold Strathberry bar which appears on the brand’s designs. The hotel’s traditional tree in the heart of the lobby features decorations in blue hues as a thank you to the NHS for all that it has contributed to our lives this year.

Brown’s Hotel has teamed up with in-house florist, Ellie Hartley, who has taken inspiration from this challenging year, has created an enchanting fairy-tale like woodland Christmas tree using wild evergreen and lichen, pinecones, eucalyptus pods and cedar trees echoing a rustic feel throughout the hotel. Ellie’s aim was to symbolise nature throughout while still embodying the traditional and long heritage of comfort and sophistication of the hotel. What about this doodle tree! See more here The Christmas Tree at Costes created by the famous textile designer Pierre Frey.

Arty and inspiring, this Christmas tree at the Connaught in London is created by Tracey Emin