Home/Travel My Day/Greece Reopening on May 14, Safely Welcoming Summer Visitors 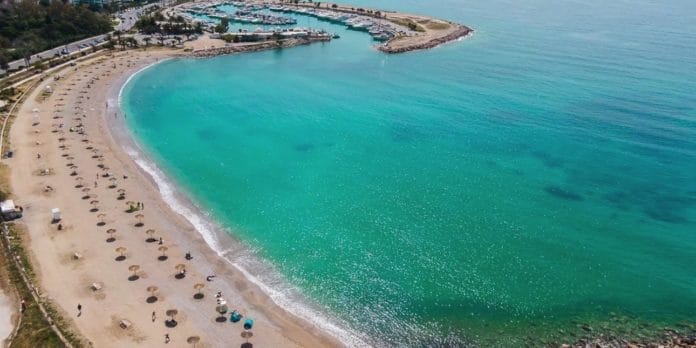 It already smells like summer at the beach in Glyfada, on the outskirts of Athens, as the strand there has been spruced up with new umbrellas and fresh sand ahead of Greece reopening to tourists on May 14.

The municipality of Glyfada left no stone unturned in its drive to make the beach area as welcoming as possible to travelers before they descend on the Athens Riviera in one month, as the Greek government holds that date as the much-anticipated reopening to the world after the lockdown.

At that time, Greeks will also be freed from having to send sms messages to the government to ask permission to leave home and the strictures prohibiting them from leaving their home prefectures will also be lifted.

This is occurring as the country — and much of the rest of the world — continues to experience record-high numbers of coronavirus intubations, mostly due to the spread of coronavirus variants around Greece.

Greece is set to ease travel from abroad and lift the quarantine requirement for American, British and EU travelers by next week, provided they are vaccinated or can show a negative test.

The move comes as Greece is gradually relaxing travel restrictions towards the official opening of the tourist season on May 14.

“We will gradually lift the restrictions at the beginning of next week ahead of the opening on May 14,” a senior tourism ministry official told Reuters on condition of anonymity.

Who can travel to Greece
The official said citizens from the European Union, the United States, Britain, Serbia, Israel and the United Arab Emirates will be allowed to travel to Greece via the airports of Athens, Thessaloniki, Heraklion, Chania, Rhodes, Kos, Mykonos, Santorini and Corfu, and two border crossings.

Passengers from those countries will not be quarantined, as long as they prove that they have received two doses of a COVID-19 vaccine or show a negative PCR test carried out 72 hours prior to their arrival, the official said, adding the tourists would be subject to domestic lockdown restrictions.

Under current rules, all foreigners arriving in Greece should test negative and quarantine for seven days.

For passengers from Britain and the United Arab Emirates, a second mandatory test is also required upon their arrival.

EU agrees on “Green Certificates” for travel
The 27 member states of the European Union agreed Wednesday to the use of “green certificates” to facilitate travel across the bloc.

Each certificate will show its holder’s vaccination status, whether or not they’ve recovered from the virus and have antibodies, or if they have a negative Covid-19 test result.

This certificate, which will be available virtually and in paper form, will allow Europeans to travel across the EU with ease this upcoming summer season.

On Tuesday, the Greek government announced that it will institute a new vaccination campaign in all Greek islands with fewer than 10,000 inhabitants, making those tourist magnets covid-free for visitors who are comping at the bit to land there for their long-awaited 2021 vacations.

A total of 85 islands encircling Greece will soon see all their residents vaccinated against the coronavirus ahead of the planned reopening of the country on May 14.

The plan for reopening calls for all the Greek islands — magnets for international travelers — to be covid-free destinations.

The move will on the one hand speed up the vaccination campaigns ongoing around the nation and bring its much-desired herd immunity closer. Of course, the knowledge that the Greek islands are basically Covid-free will be a significant advantage for the country on the worldwide stage.

Vaccination program ahead of schedule says Greek Government
At the beginning of the vaccination campaign, the Greek health authorities’ plans included the vaccination of all those living on 69 islands with a population of up to 5,000 inhabitants by the end of April.

Now the inoculation program will be extended to include all Greek islands having up to 10,000 inhabitants, which will mean a total of 85.

The intake of vaccine doses to Greece in May and June from both Johnson & Johnson and Pfizer will contribute significantly to the implementation of this ambitious plan.

Reports say that the doses to be received from Pfizer/BioNTech alone will add up to 1,500,000 for the next to months.

Back in March, a total of eighteen Greek islands were declared Covid-free destinations after their inhabitants were either fully vaccinated or had received at least the first dose of a coronavirus vaccine.

Tourism vital for Greece Reopening
Tourism is absolutely vital to the Greek economy, accounting for about one fifth of GDP and employment, according to the Greek Tourism Confederation (SETE).

The Greek sector is almost entirely reliant on international tourism with the domestic population too small and still too financially constrained following the country’s 2008 debt crisis to make up for the drop in external visitors, according to the Financial Times.