Living in the Future With Control4

Living in the Future With Control4

It’s alive! My Control4 system is alive! It turned out better than expected and we could not be happier. If you’ve been following this journey, you probably already know that I had no idea what to expect when I started. Now, I have a complete system with all the bells and whistles (even some extra bells I hadn’t anticipated!). With the help of our partners Control4 and Hylang Electric – our Control4 Professionals in Southern California – I was able to get my entire system installed and up and running at one time. But even if I wouldn’t have been able to do it all at once, I could’ve built the same system one component at a time. I said it before and I stand behind it: one of the best parts about my experience has been the ability to do as much or as little as I wanted at any given time.

Having said that… I ended up finding that I wanted things I didn’t even know I wanted – or even existed! First thing first – the NEEO remote. I didn’t learn about the NEEO until a week before my install (about 8 months after I began planning the project). But when I saw it, I knew I had to have it. And now that I’m using it, I know I made the right call. It’s great, it functions pretty flawlessly, and it’s the epitome of “less is more.”

The design of the remote is sleek and simple with few actual buttons. It includes only the essentials like a “back”, “menu”, “ok”, volume and channel buttons, as well as a directional circle a-la the first iPod (but waaaaay more sophisticated). There is also a generous color LED screen that displays more advanced functionality and options depending on the mode you’re in. When in the basic room function mode, it displays the different functions available, i.e. listen, watch, home, lighting, and comfort. These functions are constantly updated automatically (as long as the remote is on the charger at night) and soon you’ll be able to access all the parts of your system on the screen like security, door locks, etc. Exciting! 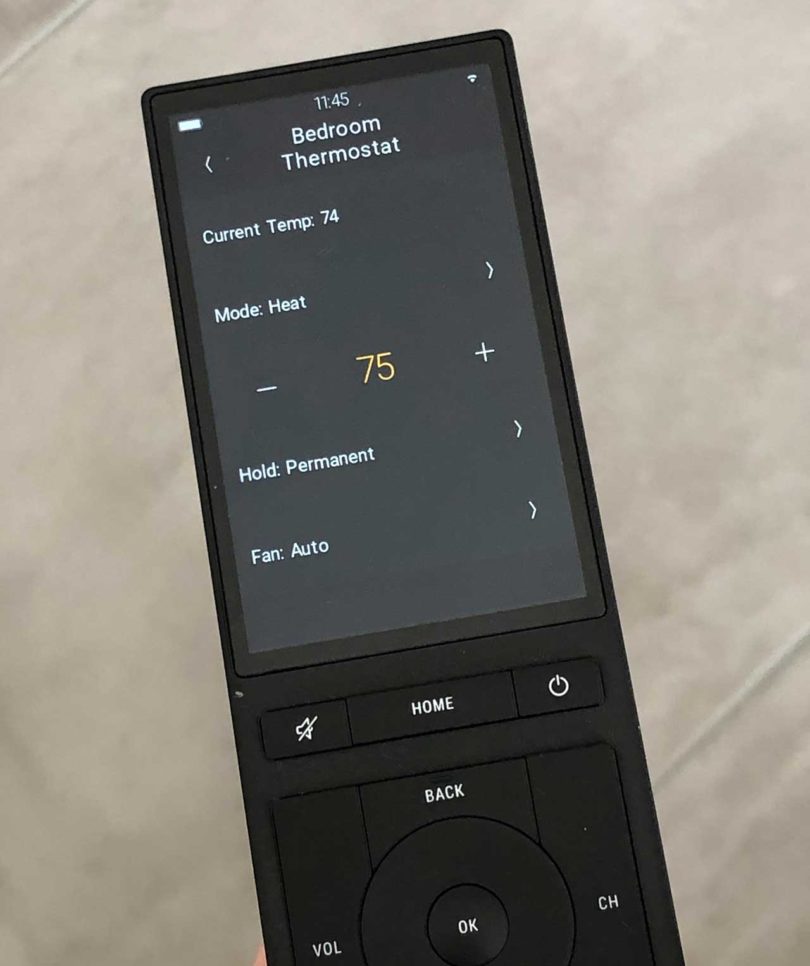 In addition to being functional as well as aesthetically pleasing, the remote is incredibly user friendly and intuitive. My 8-year old daughter has always asked me to turn on the TV and switch channels for her. Now, she picked up the NEEO remote and instantly began using it. She was so proud that she figured it out all by herself that she started bragging about being able to control her own shows.

Another part of the system I wasn’t expecting to like as much as I do was the lighting. In the past, lighting for us was just wall switches, so… not super exciting. However, in this house using Control4, we were able to put our main living area, bedroom, and outdoor lights on wifi switches. Initially, I thought it was overkill, but in practice, it definitely isn’t. I love the flexibility of being able to operate the lights remotely and start up multiple functions all at once. I am already thinking about what other rooms/spaces I can add switches to. One of the cool parts about the wifi switches is that I can access them from my NEEO remote and the Control4 App. I never have to get off the couch or out of bed to turn off the lights (the NEEO can operate any or all of the rooms on your system). The other bonus of the wifi light switches is the ability to connect lighting to the astronomical clock inside the EA-5 controller. In other words, when I set the outdoor lights to go on at dusk and off at dawn, it always knows when that is based on my coordinates – no adjusting needed for daylight savings time. And speaking of coordinates, the system incorporates geo-fencings, which I used to program my lights to come on when I’m within a mile of home and it’s dark outside. I was also able to use the wall controllers to program complex macros. I set a custom “goodnight” button that I use to arm the security system, lock the doors, turn out the lights, and set the thermostat to the perfect temperature while I sleep. 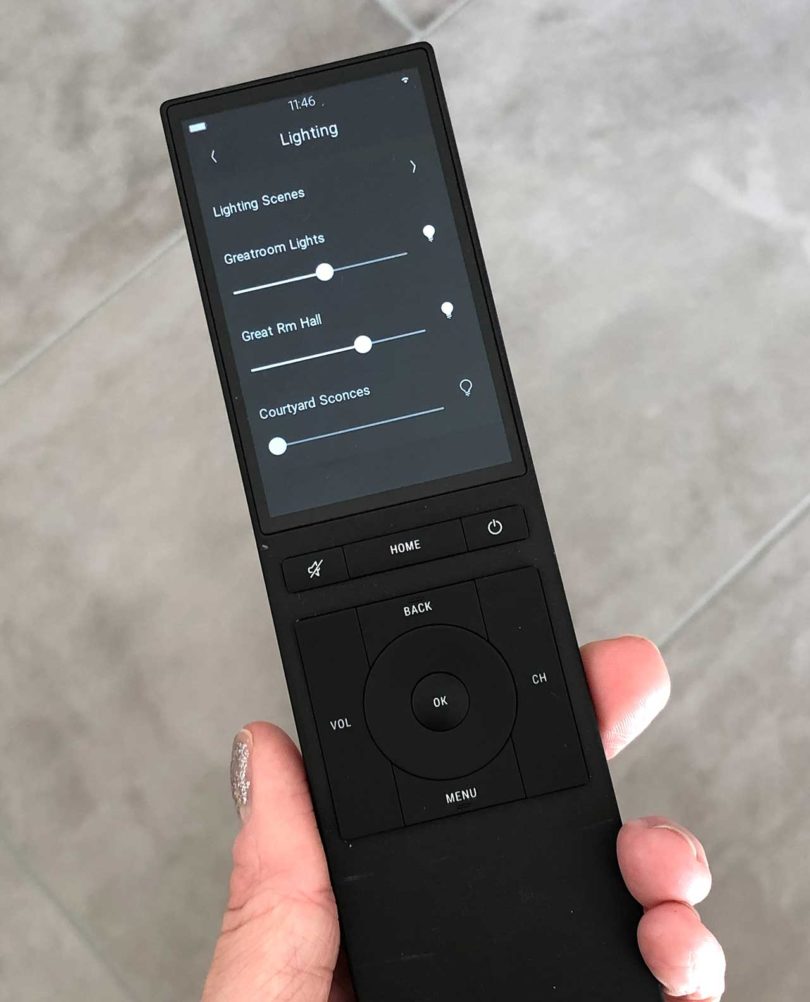 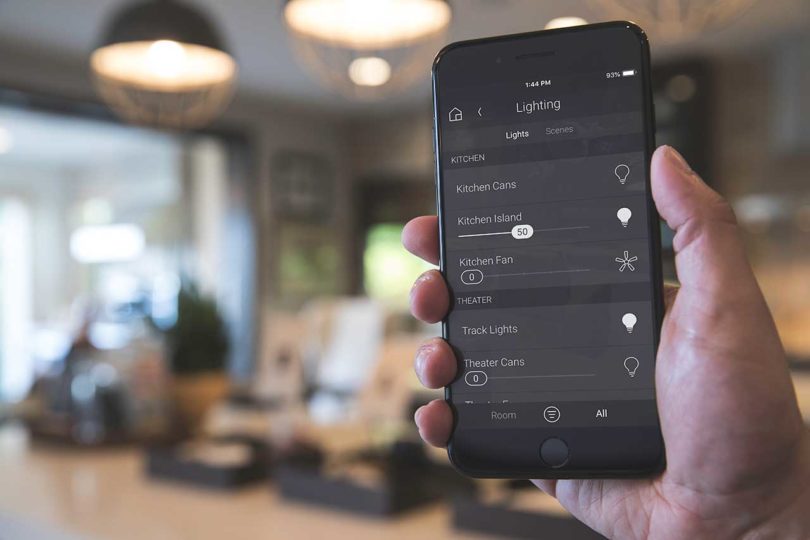 Looking back on my Control4 experience, I would say that the pre-planning for wiring and hardware planning/purchasing has been both overwhelming and exhilarating. Even now that my system is installed and I’ve been living with it, I’m still excited by it on a daily basis. I remember being a kid and having to get up off the couch and walk over to the TV just to change the channel or having to go grab a log and throw it on the fireplace if I was cold (Note from Jaime: yes, we are old!). Now, I feel like I’m living in the Future; I can watch TV or listen to music, turn the lights down, see who’s outside, turn the heat up, control the shades, lock the door, and speak to someone at the front door without even moving from my chair. I truly never would have imagined that any of this was possible, and Control4 made it all a reality. 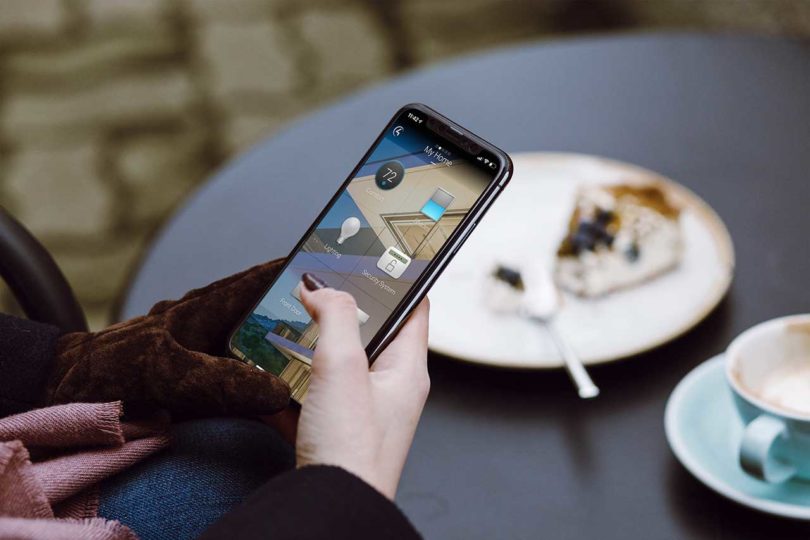