Home/Travel My Day/Metsovo: The Greek Winter Gem of Lakes, Forests and Ski Resorts 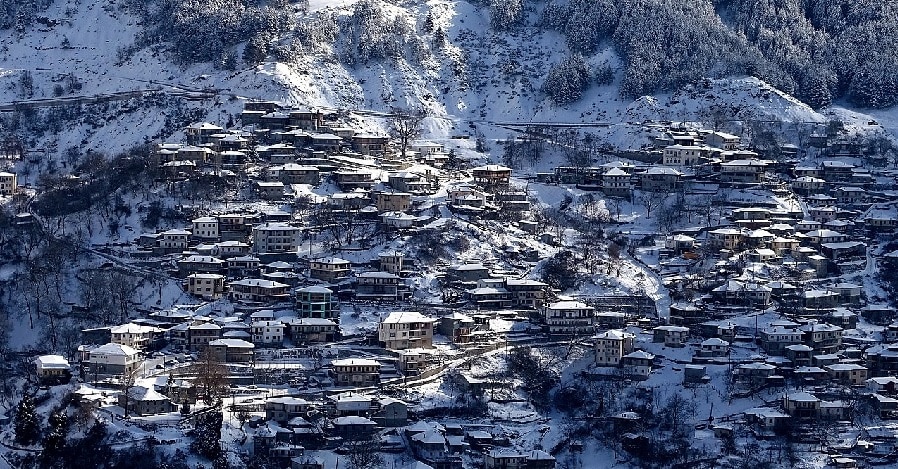 Metsovo is a renowned mountainside town straddling the Pindus mountain range where Epirus converges with western Macedonia and Thessaly.

Standing at an altitude of 1,156 metres and overlooking a steep valley below, it ranks as one of the pre-eminent winter and alpine destinations in Greece.

Built like an amphitheatre; its tile roofs and wooden porches stretch out across the slope, and its grand mansions nestle in between beech and fir trees.

Metsovo, retaining its traditional character, dots the mountainside below Katara (Katara pass). It is full of life throughout the year generously offering visitors its natural surrounding beauties.

The soothing sound of water always on the move adds to the majestic atmosphere. Half hidden in the fog or wrapped in a snow blanket as winter sets in; Metsovo practically looks like a painting.

In the 15th century, Metsovo came under Ottoman rule and became part of the Sanjak of Ioannina. Throughout the late period of Ottoman rule (18th century-1913) the Greek and Aromanian population of the region (Northern Pindus) suffered from Albanian raiders. During the First Balkan War, Metsovo was burnt by raiding bands.

On October 31, 1912, the Greek troops assisted by rebel groups from Epirus and volunteers from Metsovo, having crossed the Katara-Zygos mountain ridge overnight, attacked the Turkish garrison of Metsovo, which then comprised 205 soldiers and two cannons. The battle lasted until 4 p.m. when the Ottoman soldiers inside the besieged Turkish garrison raised a white flag and surrendered.

Metsovite travellers and traders became prosperous, particularly in the Danubian principalities and Russia, then brought the benefits of their wealth back to their homeland by constructing public buildings, bridges, churches and schools.

Metsovo; in essence, a market town, became a cultural and commercial hub for merchants and traders from East and West.

Of its benefactors, particularly noteworthy is the Tositsa Foundation, and Evangelos Averoff, who were the driving force behind the economic boom and an influx of tourism in 1970.

Metsovo is a gray stone village with red tile roofs in its green surrounding. There are many two-storey mansions, with traditionally constructed balconies (hayat) and wooden doors.

The town’s heart beats in the central square; the most famous one in mountainous Greece. Metsovo’s church of Agia Paraskevi (15th century) has an elaborate wood-carved temple and priceless holy heirlooms.

Around the yard a distinctive image of Metsovo appears: the elders, with their handlebar mustaches, usually sit on the benches in traditional costumes and wooden crooks chatting in Vlach, enjoying the first daylight.

Most of the Vlachs in Greece today live in the north of the country, particularly in and around the Pindus Mountain range. The hub of the Vlach people in Greece is Metsovo, which is the center of their culture in the country.

The tavernas in the village’s square are set early on, with their spits roasting all sorts of meats. Enjoy ‘epic’ feasts; kontosouvli in parchment paper, delicious sausages and “loads” of pies.

This is where you’ll find stores selling the region’s dairy products, of which metsovone and metsovela cheeses stand out. Metsovone was recently included by CNN Travel among its list of the tastiest European cheeses.

The forested mountains, three rivers and an artificial lake guarantee a stimulating sta at Metsovo.

If you are in search of an active vacation, the area is ideal for hiking on its marked trails, climbing, mountainbiking, off-road jeep adventuring, kayaking, rafting and of course skiing on the ski centers’ slopes at “Karakoli”, “Prophet Elias” and “Zygos”.

On the opposite side of Metsovo (6 km) is Anilio Village holding a long tradition in wood processing (anilio: means no sun, which derives from the fact that the sun sees the village for a short period during the day).

Anthochori Village, which is crossed by Rona Stream, is located 13km southwest of Metsovo. Visit its restored watermills that have now become a Museum of Ηydrokinetics.

Don’t miss a tour by the artificial lake of Aoos River Springs, where you’ll get the chance to shoot breathtaking pictures, especially during sunset, of islets covered with fir trees and amazing little fjords.

In the winter, the blue water sinks into the white landscape and in the summer it’s draped in the foliage of the dense riparian forest.

The beech forest gives way to a forest of firs to the north of the lake, the boundary of the Pindus National Park and the renowned Valia-Kalda.